Starting in January, 2011 "First Page" will be a regular column feature in The Writer Magazine. Look for it! 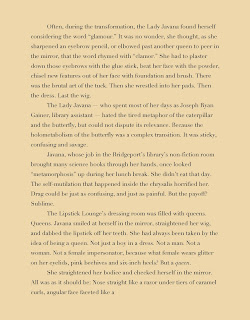 In the dressing room of the "Lipstick Lounge," the Lady Javana "straighten[s] her wig" and "dab[s] lipstick from her teeth." Lady Javana, we're informed, is neither a man nor a woman, nor "a boy in a dress" nor "a female impersonator" ("what female wears glitter on her eyelids, pink beehives and six-inch heels?"—Quite a few do, as a matter of fact, but never mind).

No, in her own overdetermined estimation, Lady Javana is a queen. I've italicized the word since the author goes to such great lengths to emphasize it.

Which points to what I feel is wrong with this opening. Rather than present us with a character, instead the bulk of this first page is taken up with a series of terms and metaphors by which Javana either identifies his/her self, or that he/she refutes. What starts out promisingly as an evocative, concrete scene ("She had to plaster down those eyebrows with the glue stick, beat her face with the powder, chisel new features . . . with foundation and blush") in which the particular (drag queen putting on makeup) stands for the general, breaks down into an exercise in denotation, such that, by the end of the page, what we've read feels more like a jacket blurb than a scene.

It's a shame, since the writing is strong:

Lady Javana—who spent most of her days as Joseph Ryan Gainer, library assistant—hated the tired metaphor of the caterpillar and the butterfly, but could not dispute its relevance. Because the holometabolism of the butterfly was a complex transition. It was sticky, confusing and savage.

As prose this can't be faulted, but the issue here isn't so much whether or not the metaphor of the caterpillar transforming into a butterfly aptly conveys the experience of a drag queen. The metaphor may or may not be apt; but the harping on it here conveys a self-consciousness that would seem to apply more to the author's fascination with his subject than to the character in question. Though hatched from its "self-mutilating" chrysalis, this butterfly never takes flight: like a lepidopterist's specimen, it's been pinned to the page and pasted with labels.

Butterflies don't go around self-consciously inventorying their butterfly-ness. Nor do readers of fiction especially want labels, and if they do want them they prefer their own. Nor do readers want judgments imposed by the author on a character or by characters on themselves. What readers want is experience evoked concretely through action, dialogue, or through a character's internal responses to particular events, challenges and situations—illuminated, perhaps, by a sympathetic or worldly narrator, and possibly by the character's own reflections, but not sewn up and boiled down into shrunken headed judgments and epithets.

Here, the only behavior exhibited aside from the application of lipstick and eye-glitter is the character's self-conscious pursuit of a label for him/herself. Even accepting that this pursuit is real—that is, belonging to the character and not to an author overly fixated on the presumed novelty of his subject—still, it's hard to imagine such self-conscious soul-searching taking place, as suggested here, on a regular basis for any duration. Surely this queen doesn't spend his/her days (or nights) mulling over what to call himself? If so, one wants to say to him/her, "Get over it, already." Perhaps folded somewhere into the meat of the story such reflections wouldn't be so out-of-place. But as an opening gambit they misfire.

What's sacrificed here for the sake of a story about someone "being a queen," is a better story about a man—a librarian—who just happens to be one.

Please submit your first page via email as a word.doc attachment. Submissions may be up to 350 words long. All first page postings will be anonymous.

Click THIS LINK for my contact information. Please include a brief signed message with your attachment and allow several weeks for feedback.

NOTE: By submitting your first page you implicitly give the author of this blog permission to quote from the submitted material (anonymously) here and in print.

Based on real advice gleaned from thousands of critiques, 179 Ways to Save a Novel is more than just a collection of ideas for troubleshooting your work-in-progress. This inspiring guide doubles as a thoughtful examination of the writing life.

Peter Selgin
I'm a writer and teacher based in Spuyten Duyvil, Bronx, New York City, soon to be Viebranz Distinguished Visiting Writer at St. Lawrence University. My passions: writing, swimming, teaching. I'm also a twin. When we were kids George and I would harmonize on Beatle songs at the back of Bus #9. The bus was driven by an obese woman named Miss Hatt; appropriate, since the town we grew up in was famous for its hat factories. Cruel children that we were, we invented this bit of doggerel: "Miss Hat is Fat she's a Dirty Rat." I'm here today to apologize for this tiny bit of evil and tell the world that, though she WAS fat, Miss Hatt was NOT a rat, nor was she dirty. She was a fine bus driver and I miss her.